The 22-year regime under Arsene Wenger came to an end hence ushering in the Unai Emery regime. The new manager has done tremendous work for the 18 months he has been around, aside from occasions such as battering at Baku and the Watford draw this season. The most remarkable ones include the performance of the new signings, notably Matteo Guendouzi and Lucas Torreira as well as the utilization of young talents – Emile Smith Rowe, Bukayo Saka, Reiss Nelson and Joe Willock.

Emery has tried and tested different formations during his time at Arsenal, majorly 4-2-3-1 as well as 4-3-3 and 3-4-1-2 depending on the availability of the personnel. These two formations have brought a good number of wins during Emery’s era. Since he will be at Arsenal for the foreseeable future, probably for 22 years like Arsene (kidding but who knows!) then we can see the evolution of midfield trio (Guendouzi-Toreira-Willock)

The success of Real Madrid heavily lies in the Toni Kroos, Casemiro, and Luka Modric (KCM) axis. Torreira has the same traits as Casemiro, Willock will replicate the work of Modric, whereas Guendouzi will work as Kroos. Guendouzi has same long passes as Tony Kroos whereas Torreira has same defensive nous as Casemiro. Though Willock is still young and unexposed enough for conclusions, his talent if natured well will develop into a Modric-kind of a player. The same way Aaron Ramsey has been deployed as a box-to-box midfielder as well as what Paul Pogba is doing at Manchester United. For this combination to work in future, the coaching staff and the manager should phase out Granit Xhaka gradually while Ainsley Maitland-Niles is made to work with this group in case the game of the day dictates that we use 4-4-2 diamond. For the case of the 4-4-2 diamond formation, Willock will be supplying the strikes at the tip of the diamond with Guendouzi and AMN on the either end; Torreira will be sitting at the base of the diamond to stabilize the midfield. 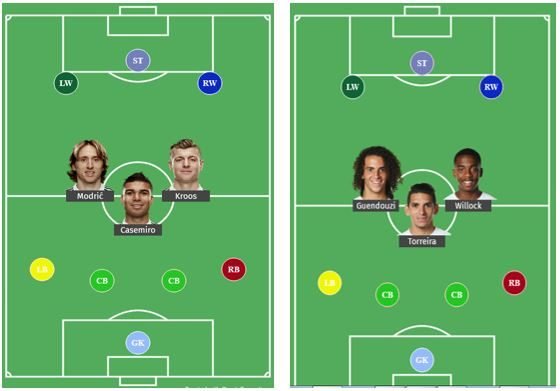 Be it 4-4-2, 4-2-3-1, or 4-3-3 as shown in fig 1 and fig 2 above, it is Guendouzi and Torreira who will need to work hard enough for the coach to build his team around. Guendouzi has a great talent and fearless enough to dictate the team from the midfield just as Kroos is doing it at Real Madrid. Willock and AMN will make it to the third personnel in the midfield with the freedom of roaming in the midfield just as Dele Alli and Pogba are doing in their respective clubs. I have decided to include AMN in this article as a midfielder despite the recent deployments as a RB/RWB, and even as a winger. The main reason is that AMN was deployed in his preferred position (midfield) last season in during the Manchester game and he performed exemplarily. 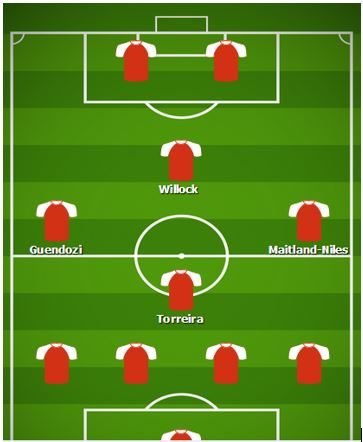 The success of Real Madrid more so in the champions league heavily depends on the KCM axis, therefore Arsenal stand a better chance of endorsing their own axis in GTW combination. These trio plus AMN have a long future at Arsenal and given that they are agemates, they will mature with years and become the powerhouse and dominant midfield. The most games have been won through the battle of midfield and Arsenal have to work on this as they plan to return to champions league and get back to the winning ways of class 2014.