Bukayo Saka has given Arsenal supporters a glimpse of what is to come during the international break with a brilliant piece of skill for England’s U19s.

Despite playing in a more unorthodox defensive role, Saka still managed to impress and one dazzling run caught the attention of several fans on social media.

He evaded three challenges before eventually being brought down by a fourth player, leaving these Arsenal fans stunned on Twitter.

Twitter: Only takes four players and a foul to stop Saka once he gets going. Too quick ⚡️

It was a great moment of skill and confidence from Saka, trying to be positive on the ball even when he was playing out of position.

Arsenal fans will be hoping that they can see more of the same from him in the Europa League this season.

Saka does look set to feature for the Gunners in Europe, with some tipping him for big things after he was named in the club’s Europa League squad.

Those behind the scenes at Arsenal clearly have high hopes for Saka and if the early signs are anything to go by, he is set for a very bright future in London. 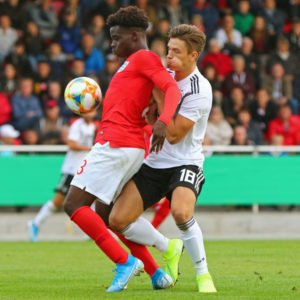 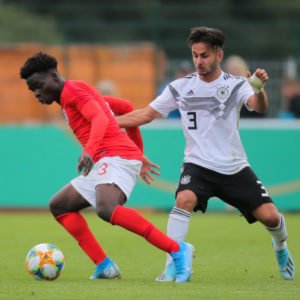