Bukayo Saka’s incredible performance in the Europa League has not only left Arsenal’s supporters stunned, but also some of the players by the looks of things.

Pierre-Emerick Aubameyang was one of the club’s senior players to praise the youngster after his goal against Frankfurt.

These Arsenal fans on social media have been left delighted after seeing the message that he sent him after the game.

Twitter: @Aubameyang7 Kids a freak, he will reach the top of world football one day (@LacaSweat)

Twitter: @Aubameyang7 @Arsenal Teach those Young lad how to score they are your successor @Auba (@Lambert761)

Seeing the two pictured alongside one another and playing together is a sight that will simply delight plenty of Arsenal fans up and down the country.

The Gunners have several talented youth players coming through the ranks and seeing them being given opportunities and flourishing in Europe is a timely boost for the club.

Saka is a player that many have tipped to burst onto the scene this season and in Aubameyang, he is learning from one of the Premier League’s best forwards.

Should Saka feature regularly for Arsenal? 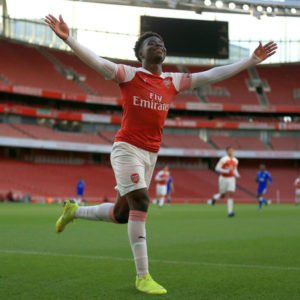 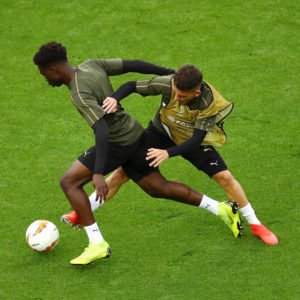